Long time, no see–but let me assure you that the Owens Lake Project isn’t just still alive, things are about to get VERY busy around here (and around the lake). 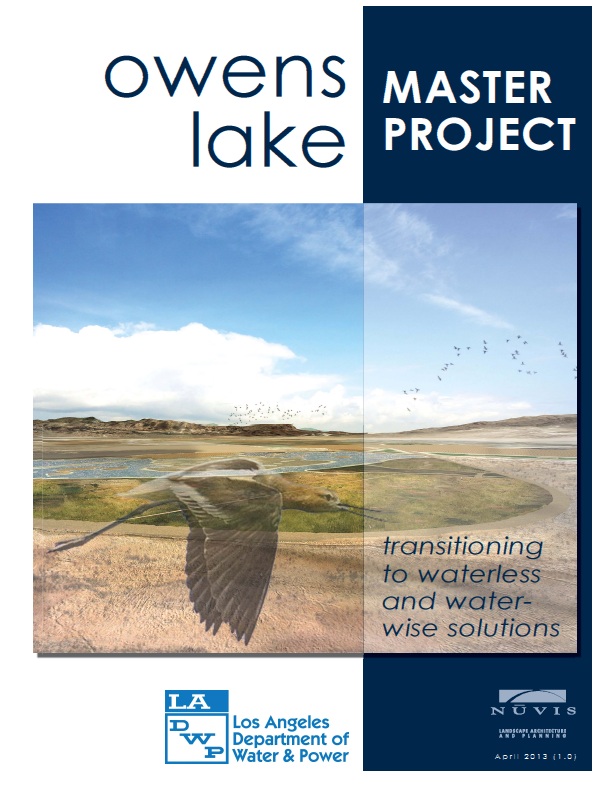 First, a little background to catch you up on the details.

Just as I was ramping up work on my project a couple of years ago, everything hit a state of suspended animation.  LADWP, along with several groups working to restore Owens Lake, was part of an ongoing working group loosely known as the Owens Lake Master Plan Committee.  That group met regularly to discuss, negotiate and occasionally battle over plans to include more habitat restoration and maintenance along with the dust control on the lake that Los Angeles Water and Power was obligated by court order to do.  And then abruptly and unexpectedly, LADWP withdrew from work with the committee more than two years ago.  All work on the proposed Owens Lake Plan ceased.  Ground to a halt.  And this was a very worrisome development for all who care about the lake, and the birds and wildlife who call it home.

I figured things couldn’t stay quiet forever, so I closely followed any news I could find coming out of LADWP or the Owens Valley, usually by way of updates from the Owens Valley Committee.  But as the months dragged by with LADWP still silent, I began to worry.  Were they really walking away from all the hard work they’d done with the committee, and planning to cease any further restoration work?  Things were beginning to look grim.

And then suddenly, much to everyone’s surprise, LADWP last April announced their proposed Owens Lake Master Project.  They’d renamed the old draft Master Plan, but retained a great deal of what was being asked for by the committee.  It is not without controversy–some of the groups involved with the committee have rejected the proposed Master Project, as they feel it doesn’t go as far as they’d like, and that it will release LADWP from some of their responsibilities on the lakebed.  But most of the groups, including Eastern Sierra Audubon, support the proposed Master Project–and assuming the various environmental impact reports and proposed legal obligations on LADWP meet certain standards, this extensive project may become reality sooner than later.

From my own perspective–and I think this is similar to the perspective of the groups who are supportive of the Master Project–this is a very, very good thing.  Going forward with it would eliminate who knows how many more years of negotiations and litigation and result in serious restoration and remediation of significant portions of the lakebed.  It will also, for the first time ever, offer park-like locations and viewing platforms around the lake to bring the public to Owens Lake at long last.  Angelinos, you, more than anyone else, need to add this to your must-see lists.  Come visit this beautiful valley that provides the clean Sierra water that comes out of your tap daily.  You will not be sorry you did.

The Project is not perfect, but it’s a LOT, and it’s a great start.  I encourage you to read the report–the overview, linked here, is relatively short and accompanied by extensive graphics showing just what the Master Project would do for the lake.

It’s easy to see LADWP as the villain in this story; indeed, I’m often torn on what my own opinion is of the department.  They’ve been greedy, they’ve been historically inconsiderate of the valley (and those who live there) from which they take their water, they’ve been short-sighted and indescribably stubborn in litigation over the lake and the aqueduct.  But looking back over the last decade, their movement toward a willingness to incorporate habitat into their dust control work has been steady–and impressive.  The corporate culture of the department has shifted, and it shows in the increase in the number of biologists and other specialists they employ on site at the lake.  They’re showing a measurable commitment to the environment there, even if it’s not as expansive a commitment as some would like.  I think it would be a mistake not to recognize this, applaud it, and continue to work with them to ensure this work becomes permanent, and even expands.  They’re not the hero of this story–yet–but they are showing an effort at good work on Owens Lake.

So, where does that leave this project?  At warp speed, approximately, which I embrace with great excitement.  I’ll be posting updates on the lake regularly over the coming months, and even better–I’m thrilled to announce that G2 Gallery in Venice, California, along with partner Audubon California, will be exhibiting my work on the project this summer, from June 10 to July 27. This phase of the project will concentrate on bird and wildlife activity on and around the lake, showing how well those populations have adapted to work already done on the lake, and why further restoration of the habitat is so important.

In preparation for that exhibit, I’ll be spending considerable time at the lake for the next couple of months to document spring migration.  That work will include a more than 45-mile perimeter hike of the Owens Lake shoreline, which will allow me to intensively document activity on the lake both day and night.  There’s no record of anyone having done this before, so I’m very excited to undertake this project.

Things are just getting interesting–so check back frequently!  If you want to get first word of new developments on the project–especially my live updates from the lake during the perimeter hike!–consider following me here on Facebook, or Twitter.